skip to main | skip to sidebar

Apple picking... in our yard? 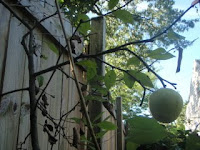 We just realized that our new home has an apple tree in the back yard. It's probably not going to get a whole lot of light, and I doubt the apples will fully ripen, but we've enjoyed using the apples in the juicer with carrot (and some beet, celery, parsley and ginger). Since organic u-pick seems impossible to find in this part of the mid-Atlantic, I'm thinking now that we should consider transplanting the apple -- or planting another apple tree in the 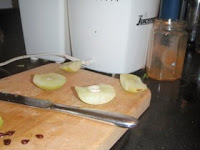 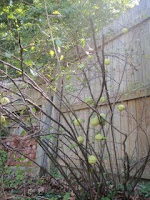 Posted by Crunchy-Chewy Mama at 2:12 PM No comments:

"But he showed remorse," said my kind friend when I called her crying to apologize that my son had bitten hers at school. "What more could you want?"

Really, what I want is for my son not to feel that kind of out-of-control anger. I know he's three and a half and that some socially inappropriate behavior is, well, developmentally appropriate. But I also know that when he went through a similar phase two years ago, some body work and energy work really seemed to help.

And I know that as someone who suffered from undiagnosed depression all through my childhood, it's no fun to feel unhappy inside. Although medication helped through a few dark periods in my adulthood, it's become crystal clear to me that what has made the most profound difference has been a combination of non-drug remedies: a gluten-free, casein-free diet; regular exercise and yoga; and body work and energy work, including acupuncture, chiropractic and craniosacral therapy (CST).

So when my son had a biting episode a few weeks back for the first time (a 12-hour playdate is a rough thing for overtired cousins inhabiting a small space on a rainy cold day), I made an appointment with the acupuncturist who saw us when he had an ear infection months ago. While I waited the three weeks before that opening, I also got him in for CST work, which I though was probably more useful for him (lasting a full hour) but is twice as expensive as the acupuncturist who works with kids.

The acupuncture was scheduled for Friday at the end of the first week of school. E seemed to enjoy school fine and had none of the crying some other kids did upon leaving their moms for the first time. But on Tuesday, the second day, he did bite the arm of his friend, G, in what was probably a tussle over a toy. "It might have been provoked," the teacher said, having not seen the lead-up. But I was deeply troubled.

My kid is nice. He's usually patient and kind. When he does physical stuff, something seems like it's just not right inside. That's an awful feeling, and I don't want him to have it. To me, the biting is a symptom. Maybe he's feeding off of my stress. Maybe it's partly the change of season, as the acupuncturist suggested. Maybe it's that we've been trying some dairy in his diet, and maybe it doesn't agree with him any more than it does with me.

What I do know is that he and I both had a nice day Friday and a pretty mellow weekend after a week of volatility and meltdowns. All the doctor did was use a little roller on a few spots and then put little acupressure stickers on his ears, hands and feet. Thinking we might try needles on him next time, she did a demo on me with a quick insertion to two points that address the kidney meridian and fear. "You'll have a good day, too," she nodded to me.

And I did. Within a few hours, the sense of urgency and crisis was gone. My son and I had a lovely time together. We'll see if he can hold onto that calm through today, the first day of the second week of school.
Posted by Crunchy-Chewy Mama at 9:23 AM No comments:

I haven't been pro-vaccine for a long time, since I got the flu vaccine in my 20s and felt terrible.

Now that we're facing a potentially bad flu year, there is a lot of talk about vaccines for flu and specifically for H1N1/Swine Flu. I'm hoping that the alternative folks are right that the best way to avoid getting seriously ill is by avoiding refined foods -- especially sugar and flour -- and generally eating a healthy diet, along with giving our bodies assistance in fighting things naturally by getting chiropractic work, acupuncture or craniosacral therapy.

But we don't always get the sleep, exercise, or nutrition that we need, so I've ordered from Perelandra the 2009-2010 Flu Season Balancing Solution from the Microbial Balancing Program and also FSBS+, which is supposed to address pandemic strains of the flu. These bottles are $10-15 and from a farm local here in Virginia. I know some folks are hoping their homeopaths can make a homeopathic version of the standard vaccine.

I hope that we can do okay, as we did last winter on health and wellness except for the week after the Holistic Moms chapter launch (and the Inauguration, which was an exciting but very long day). The following week, my son came down with an ear infection that I'm pretty sure was his system's response to his mom's stress. That lasted over a week but cleared without drugs. We were still nursing at the time, though, and this year, he won't have that protection.

This season, I hope we can find the inner balance we need and can count on the Perelandra solutions (the above, as well as the Immune and Lymphatic solutions) to stay healthy.
Posted by Crunchy-Chewy Mama at 12:20 PM 1 comment:

In the world of nutrition and alternative medicine, the journey toward health just keeps getting more interesting. This blog will cover a variety of healing modalities as I describe my own current endeavors and recent discoveries and share interesting tidbits I've gleaned from others.

I'm a mother of a three-year-old living outside of Washington, DC. A former high school English teacher, I am always looking for ways to help my immediate family, my extended family and my broader community feel healthy and happy.