skip to main | skip to sidebar

This is what coconut flour waffles (with a little almond meal and flax meal) should look like: 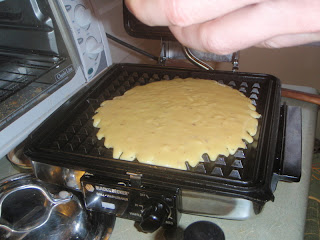 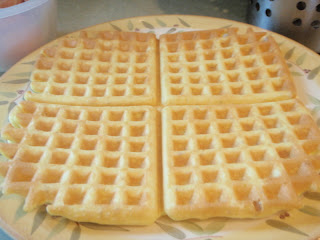 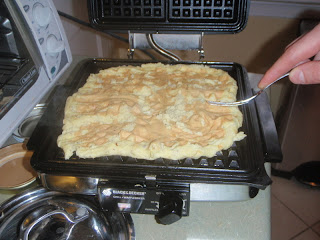 recipe, and we use coconut milk and almond mi 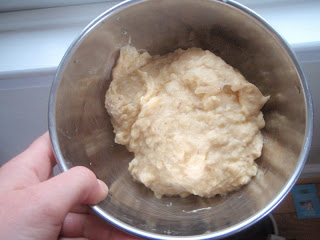 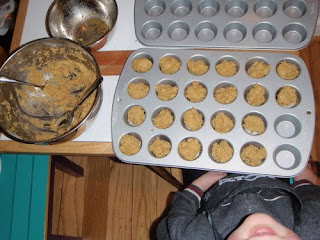 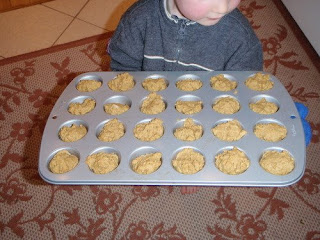 At our Waldorf school's Parent-Child class, the daily snack kids make is whole wheat rolls, which are eaten with freshly churned (shaken in a jar with marbles) butter. When the rolls come out of the oven and we sit down to give "blessings on the meal," fresh organic apples are cut as well. The teacher was open to us substituting a gluten-free recipe until we came to the realization that you don't knead GF flour, which defeats the pedagogical purpose of children getting involved in the tactile experience of moving their hands in the dough.

So we decided that we'd just bring our own GF rolls. At first I brought in yeasted rolls like those at school, but they looked nothing like the nice, round wheat rolls. I decided that for a mama (and maybe her son) with Candida issues, I might as well avoid the yeast and instead make more of a mini-muffin. Since we don't have anyone with a nut allergy in class, I've started using almond flour to make these less carby, empty calories. Here is the recipe I've hit on that I think works.

I didn't try using cup liners and allowed my food to touch the evil Teflon, so I don't know about the sticking factor with cup liners.

Addendum:
My son wanted to make "heart cookies" again. Although this was not cookie dough, we did have some success after I froze the dough. They weren't exactly pretty, but they made the kid happy. Cooked them 6-8 min. 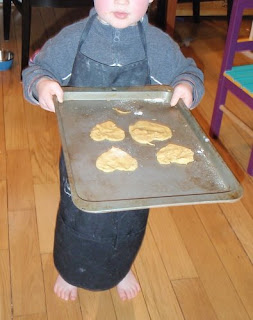 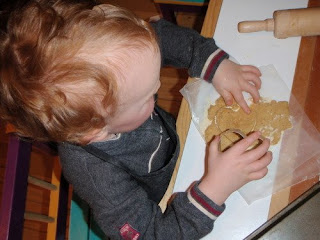 Posted by Crunchy-Chewy Mama at 8:25 PM No comments:

Dropping some silver on supplements

I just spent $132 at the Vitamin Shoppe. Wow. My husband has an eardrum that has been ruptured for over 48 hours and still hurts a lot. I bought some tea, colloidal silver supplement and nasal spray, grapefruit seed extract ear drops and nasal spray, some probiotic (on sale), calendula tincture (seemed like a good idea) and some more homepathic remedies (including something that my son grabbed because it came with a little Curious George pouch - even the alternative stuff markets to kids! He's been sick, too, so I cut him some slack, especially after he agreeably put several items back on the shelves and since he'd been whining a whole lot before we got into the car).

When I first went on my Save-My-Adrenals-and-Thyroid health kick starting in early 2004, I spent that kind of coin on capsules often. A lot was at the Vitamin Shoppe, where you get little coupons every so often if you spend a lot, and I also shopped at Village Green Apothecary in Bethesda, where they carry brands usually only practitioners have but at a better price. Since my thyroid has stabilized and my nutrition is so much improved, I haven't been as much of a supplement junkie. And certainly in this economy with a one-income family, I'm usually more reserved before throwing $25 bottles of dried mushrooms into my basket (my sister-in-law swears that one helped her). But since the hubby isn't of a mind to get energy work and is still in a lot of pain, he told me to get "whatever looks good." After a week at home with my sick son, who was on a nursing binge to fight his fever (which also turned into an ear infection), I was ready to jack up the credit card for our health at the supplement store (and I already have with craniosacral therapy and an acupunturist who used some cute little tools on my boy to open his meridians and did a few needles on me when I mentioned his clinginess. It always comes back to me!)

Considering a possible run for reconception, I'm also thinking that it's probably time for me to actually see a doctor -- a holistic-minded one for sure, and preferably one who starts with some energy work, but someone who can make sure I'm in a safe place to possibly go forward with trying for a bigger family. That will cost a pretty penny, too, I'm sure!
Posted by Crunchy-Chewy Mama at 11:47 PM 2 comments: 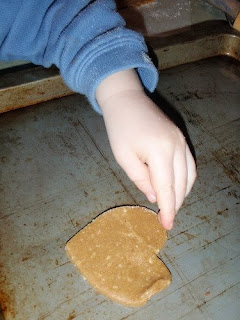 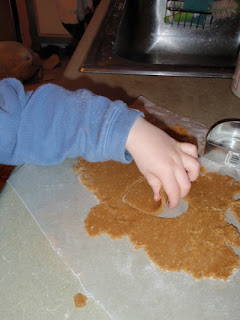 My camera battery died before the cookies came out of the oven, but here are a few of our successful baking experience making cookies to take to our Waldorf school tomorrow, where the class will be be baking Valentine cookies with whole wheat. We always bring our own gluten-free alternative to our Parent-Child class.

I always like to add almond or another nut flour in recipes to add to the protein and fat content so that the cookies don't cause a crazy sugar reaction. They are also quite low in sugar compared to some other recipes, but I'd still rather have something good with my something not-so-good.

Dry ingredients to mix together first:
- 2 1/4-1/2 cups of GF flour
I used maybe 1/3 almond flour, 1/3 arrowroot, 1/3 tapioca and the rest brown rice flour
If you use only dry sugar/sucanat/rapadura (or date sugar or maple sugar), use closer to 2 or 2 1/4 cups of flour
If you want to substitute some molasses or maple syrup (or honey) for sweetener, add in a little more flour
- 1/2 teaspoon baking powder
- 1 1/2 teaspoon xanthan gum
- 1/2 teaspoon baking powder
- 3/4 teaspoon salt

Set this dry mixture aside

Gooey mixture
- 3/4 cup to 1 cup oil -- I used half coconut oil and half butter. We can tolerate a little dairy, and I do think butter makes for better cookies. Use a little more oil if using less wet ingredients (i.e. no liquid sugar)
- 1/3 cup sucanat, rapadura, date sugar or maple sugar -- sugar that still retains some of its food quality and hasn't been stripped of everything
- a small glob (maybe 1 teaspoon) of black strap molasses

Mix these together with a hand mixer. You might want to heat the oil/butter some first to encourage the chunkier natural sugar to melt/mix well.

Place on cookie sheet (grease first with coconut oil if it's a sticky one, or put on parchment paper if you want to avoid Teflon)

Bake at 350 degrees for 7-14 minutes. I made my cookies quite thin (so I'd have plenty of them) and baked for 7-8 minutes. I also did a few trials in small balls and they cooked well in 8-9 minutes.

These cookies were light and had a shortbread quality -- not particularly chewy or soft. And of course with the natural sugar, they are on the brown side (and uneven in color since I didn't warm my oil and also added the egg at the same time as the oil and sugar instead of after). But they were perfect for cutting into shapes, and they sure were tasty and satisfying!
Posted by Crunchy-Chewy Mama at 9:04 PM No comments:

"Feed me" said the Fever

I've always intended to learn more about both homeopathy and herbalism, but I don't get serious about either until an illness prompts me to drag out some books and to poke around online.

When my son woke the other night before 9:30, we could tell something was off. He'd had a small cough and looked a little peaked, and his dad had been fighting off a cold for a few days. E was so out of it and resistant to going back to sleep in his bed/alone, I brought him downstairs, and he snuggled in and fell asleep, staying asleep as we finished a rare night of actually watching a movie (actually, we'd started the movie the night before and were really hoping to finish it this time!). The boy had some twitching and seemed mildly delirious, as though he was having vivid dreams and thinking he was awake.

But still, it wasn't until after midnight that I felt the heat radiating off of him and started to smell on the acrid tinge to his breath that told me his body was becoming a bug-killing cooking machine.

Even eHow has an article that explains a fever is a body doing good work. We have never tried to artificially lower our son's fevers with Tylenol or Motrin, even when it once went up to 104.7. I'm sure we'll have to resort to allopathic medicine at some point, but whenever possible, I hope to let his body's immune system do its job and help it out only with natural means.

Our doctor said he thought frequent applications of belladonna might help. That I actually had at home, so we started it a few hours later when the boy woke up from drowsing on the couch with his dad. He did seem to perk up a bit, and he ate some. I put him in the Ergo and we all took a short walk in the unseasonably warm, 50-degree afternoon.

The night was a little smoother, but he still had lots of desire to be near me, and I nursed him in bed even though we'd stopped that weeks ago (we also are using diapers during this illness even though we'd had our first very successful diaper-free week).

But still, he was around 102 this morning, and the cough sounded worse. So we asked the doctor to fit us in. E ate a little bit this morning and drank some of his blue Odwalla juice that he'd randomly demanded in the middle of the night, but for the most part, he slept all morning.

The doctor was not worried about the chest sounds and saw nothing in the ears. We discussed symptoms, and he determined that gelsemium might be the new remedy to try.

I used the Ergo again in the grocery store and gave him some pellets once they'd been rung up. The boy was about to check out, too, practically asleep and drooling on my front, all 30 pounds of him.

After we got home and he wanted to be up from resting, he requested coconut juice and then mango coconut yogurt. I put it in front of him after spooning him a few bites and offered that I could feed him if he needed me to. A minute later, he demanded, "Feed me!" a phrase I never thought I'd serious hear from my almost-three-year-old, or from anyone outside of Little Shop of Horrors or a TV sitcom, for that matter.

But he only wanted a few bites and then said he needed to poop on the potty, which I took as a good sign. After that, more rest, more nursing, more rest, more nursing. It's like I have a baby again. It's much calmer and quieter around here than I'm used to, and I can appreciate that, but I sure do hope the little guy is back to his old self soon.
Posted by Crunchy-Chewy Mama at 4:01 PM No comments:

In the world of nutrition and alternative medicine, the journey toward health just keeps getting more interesting. This blog will cover a variety of healing modalities as I describe my own current endeavors and recent discoveries and share interesting tidbits I've gleaned from others.

I'm a mother of a three-year-old living outside of Washington, DC. A former high school English teacher, I am always looking for ways to help my immediate family, my extended family and my broader community feel healthy and happy.